ADVANCE TICKETS & PAYMENT ON THE GATE

As restrictions have been lifted we are allowed to accept payment on the gate on race days. Advance tickets can still be purchased and used for all our meetings and they can be purchased from the link.

The Junior Ministox formula allows the younger generation to cut their teeth in motor racing. This is a fine formula for boys and girls to attempt to emulate their heroes or in some cases “Dad”. Boys and girls between the ages of 11 and 16 can take part. 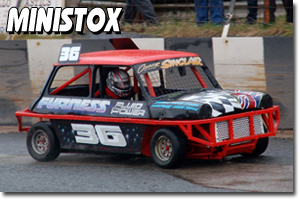 You may be thinking that these are expensive machines, fear not, the cars are completely standard 1000cc Minis engines and the body of Ministox cars formed from the shell. The cars carry sufficient armouring to prevent the youngsters from coming to any harm due to over-enthusiasm in this contact class where nudge and spin is allowed. The mini’s have very strict rules governing the modification allowed to the engines, this makes for very close racing. The aim of a Junior Ministox driver is to win the championship. Due to this a Junior Ministox car will generally last a season or two.

The Senior Minis are very similar to the junior except using a 1275 engine with limited modifications and 13″ slicks being the favourite tyre choice. It is a contact formula with nudge and spin racing, hence the cars still have welded frames to ensure they last more than a couple of meetings. 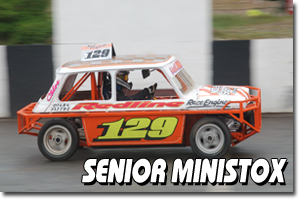 In it’s first season the average grid was about 6/7 for the first points meet of the year 12 cars lined up and proved to be close exciting racing all day long. The aim of the game is keeping costs as low as possible so limited restrictions apply to the engine, even so the more ingenious engine builders will always take things to the max.

If its fun you want this could be the class for you as one stock car driver had a go in one on practice day and said it was the most fun he’d had in a race car and more and more drivers are swapping over to it. It is also a easy step up from junior ministox. Either take out the restrictor and let the 1000cc sing or drop a 1300 in at little cost and off you go. 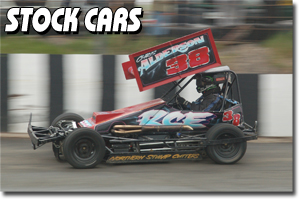 Contact between the cars is allowed – actually it is truer to say contact is encouraged. Generally races are 10 or 15 laps on a quarter mile oval track so the top guys at the back have 4 or 5 miles to pass up to 20 cars who are also intent on getting to the front as quickly as possible.

A stockcar is a custom built car, usually with a very powerful and highly tuned engine. Stockcars have nudge bars for aid in passing an opponent.

They are built with a single seat, rear wheel drive and are open wheel design. (The only open wheel formula raced at WSCC) When something goes wrong it usually goes wrong big style.

Bangers are one of the most popular forms of motor sport at Warton Stock Car Club, and always a real crowd pleaser. As the name suggests, Banger Racing is a full contact, crushing formula. This is the last stop on the line that leads to the car crusher for somebody’s one time pride and joy, which has just failed the dreaded MOT test. Needless to say this is not just a contact formula but destruction is actively encouraged. Cars race, crash and are regularly destroyed. Indeed destroying the opposition is often the preferred objective rather than just winning the race you have entered. The final race of each meeting is the electrifying Destruction Derby!! 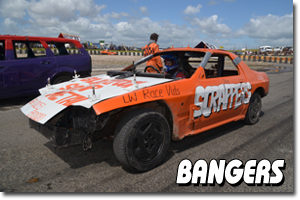 efore a car can be raced it needs to be totally stripped. This means taking all the glass and flammable materials out of the car. A drivers seat is left in which needs to be fitted with a safety harness. As well as a harness drivers must have a roll hoop in the car. Doorplates are fitted to the drivers door for safety. The fuel tank is moved inside the car as well as a battery box, radiators are replaced by water tanks under the bonnet. Welding to the driver’s doors is allowed but any other welding is forbidden.

The big league spectacular Unlimited Bangers are a popular part of the scene with the high powered Ford Granadas taking on the Jaguars, big Datsuns, Rovers and various other “material” on a grand scale. Most Banger Racing though is in the limited range with an engine limit of 2000cc, 1500cc and Micro's. Just as spectacular as the Unlimiteds but easier for the drivers to obtain and transport.

Some meetings at Warton are “Team Meetings”  where teams of 4 cars compete against one another. 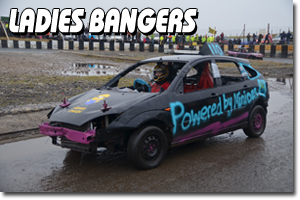 The name Banger conjures up an impression of heavy contact racing. Ladies Bangers however are an exception to this rule being a "limited contact" class, nudge and spin (nudging in the racing direction only). Don’t be misled though, the action and entertainment that this formula dishes out is as entertaining as any other Banger formula with large grids of cars seeing cars spin out in all directions.

The Ladies Banger is designed to tempt you, the spectator off the terrace and onto the track for the first time. The cost and preparation are kept to a minimum in Ladies Bangers. The cars used are all generally standard cars, with the radiator being kept in its standard position preventing any "heavy" contact, although there is still more than enough contact to keep spectators enthralled with the spectacle! (but the cars can last a whole season for a skilled driver) 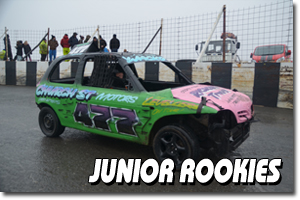 The Junior Rookies are often the choice of Drivers just starting out in racing and not necessarily wanting to spend the money on a Ministox. Unlike the banger the juniors are striclty a nudge and spin formula (no spinning to the outside). Large grids can normally lead to some action packed close racing, with kids from 11 years old showing there skill on track.

Junior Rookies are a simple and easy build with Nissan Micras and Ford KA's being the popular choice. H-Frames and Door Bars fitted for driver protection, along with safety nets to protect there heads.

Definately a class that just keeps on growing and is always one not to be missed watching on a raceday.

Thank you to John Marlow for the write ups.

Payment on the gate and advance tickets are accepted